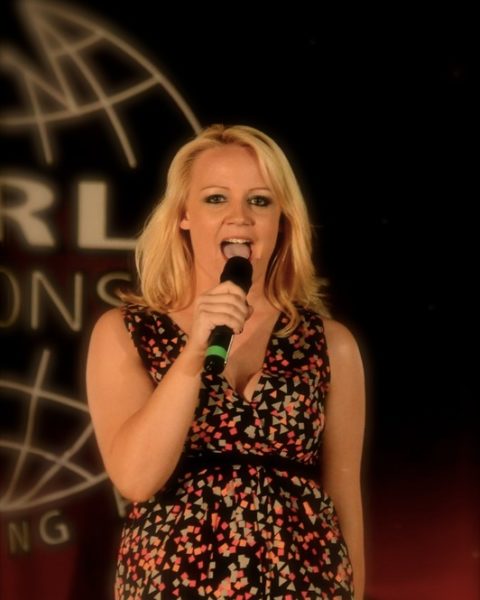 Susan won all overall awards in each category in the World Championship of Performing Arts in Los Angeles in 2010. Susan won as champion of the world for her performance in a duet called Talented Inc.. This final was aired all around the world on different TV stations and also on the Internet.

Susan also did very well with her own songs in the original music competitions and won gold for them all.

Susan has won numerous medals and trophies for Singing, Irish Dancing, Drama and Poetry competitons all over Ireland

Susan graduated from the Royal Irish Academy of Music and DCU with a 1st Class Honours degree in Music Performance. Susan has been singing, dancing and acting since the age of 3 and has performed in prestigious venues all over Ireland and around the world including Portugal, Italy, Germany and America. She has won numerous prizes and overall bursaries in many Singing, Drama and Dancing Competitions worldwide.

Susan has attended many master classes with notable singers and musicians such as Ann Murray, Graham Johnson, Sarah Walker and Ugo Benelli. She has performed in many shows, musicals and operas, most notably: Susanna (Le Nozze di Figaro), Mercury (Dido and Aeneas), Kate (The Yeomen of the Guard), Nancy (Oliver), Golde (Fiddler on the Roof), Shona (Poga's Wonderland), Maria (Sound Of Music), Eliza (My Fair Lady).

Susan represented Ireland in the 2010 World Championships of Performing Arts held in Los Angeles. She returned with many Gold medals for singing and acting, and won overall awards for her age category too. She was absolutely delighted to receive the title of "Overall Champion of the World" for singing in the Grand Finals which was aired live on the internet and viewed all over the world. This was then later broadcast on Fox TV Channel in USA. Whilst in Los Angeles, Susan was approached by two record companies who are interested in signing her for her original songs. All of her originals were awarded Gold and Overall Awards.

Susan has recorded her own cd of original songs and currently performs at many kinds of gigs around Ireland singing with different bands and also solo gigs of her own songs accompanying herself with guitar and piano.

In August 2019 Susan's band Future Fears supported Christy Dignam and Joe Jewell of Aslan at a gig in Boomers in Clondalkin, Dublin